Many measurements at PANDA, like the determination of cross sections and the measurement of line shapes using the energy scan method, require a precise knowledge of the luminosity. The luminosity relates the measured event rate \(\dot{N}\) and the reaction cross section \(\sigma\) via \[\dot{N} = \sigma \cdot \mathcal{L}\]

To reconstruct antiprotons at small scattering angles, the luminosity detector is placed 11 meters from the interaction point and very close to the beam pipe. The antiprotons are detected by novel silicon pixel sensors called HV-MAPS. These sensors are arranged in 4 layers with each layer consisting of 100 HV-MAPS in order to reconstruct the antiproton tracks. To minimize multiple scattering, which would reduce the achievable momentum resolution, the sensors are placed inside a vacuum and are thinned to a thickness of 50 µm. The beam pipe vacuum and the detector vacuum are separated by an aluminized foil made out of PET. As the sensors are placed inside a vacuum they require an active cooling. This is achieved by glueing the sensors on CVD diamonds which are mounted in an aluminium support structure. These are arranged in 8 half-planes. Each half-plane encloses a stainless steel pipe through which ethanol at a temperature of -25°C is pumped. To operate and readout the sensors, additional electronics (signal repeaters, power regulators) is required. The circuit boards housing these components are placed in the vacuum as well and are mounted onto the half-planes. 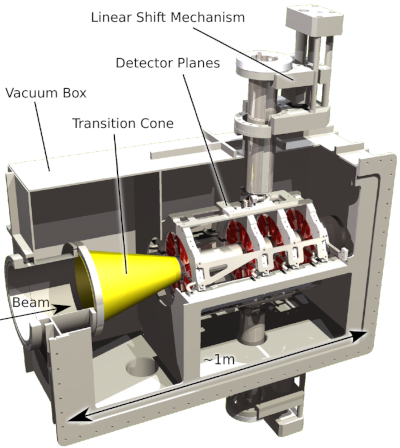 The hit data is transmitted from the sensors to FPGA readout boards using fast LVDS signals. There the hit data is formatted and sorted by their time stamps. The data frames are then sent to readout computers using optical cables. The readout computers reconstruct the antiproton tracks from the received hit data by using highly parallel GPU-algorithms and are saved for further analysis.