Determination of the Luminosity

An important quantity in high energy physics experiments such as PANDA is the luminosity \(\mathcal{L}\), which indicates the number of particle encounters per time and area. There are two different types of luminosity: the abolute and the relative.

If one wants to determine the cross section \(\sigma\) of a certain process in the experiment, one needs knowledge about the absolute time-integrated luminosity and the number of events \(N\).

To determine the luminosity, one can use a well-known process as a reference and calculate the luminosity with the event rate. In the case of PANDA, elastic antiproton-proton scattering is used. 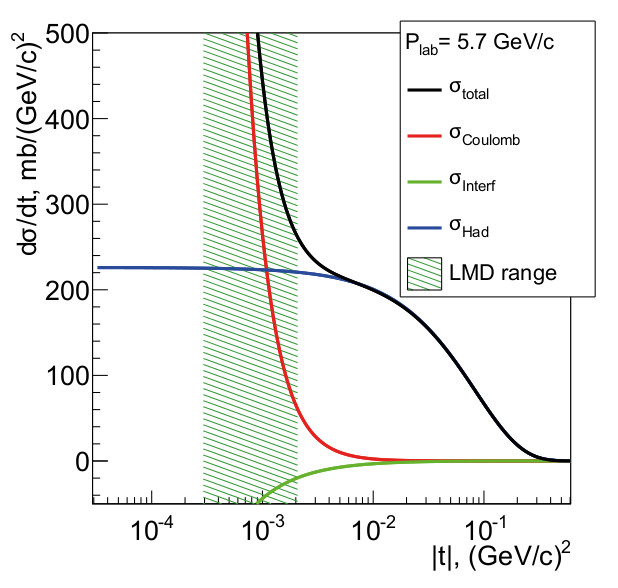 The cross section as a function of the energy transfer \(t\) consists of three parts: the Coulomb part, the hadronic part, and an interference term. For small energy transfers, i.a. small scattering angles, the Coulomb part dominates, which can be calculated precisely with the help of QED. The PANDA Luminosity Detector measures the tracks of the elastically scattered antiprotons in an angular range of 3-8 mrad. After the scattering at the proton target, the antiproton go through the magnetic field of the solenoid and a dipole magnetic field before they can be detected in the luminosity detector.

In order to be able to determine the luminosity from the measured tracks, the tracks must be tracked through the two magnetic fields back to the interaction point of the PANDA detector. By fitting the theoretical model to the distribution of the obtained scattering angles the luminosity \(\mathcal{L}\) can be extracted.